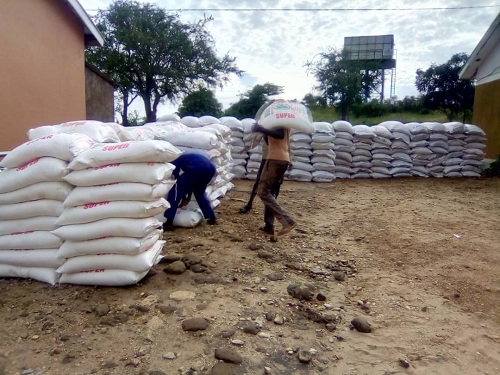 The Kotido district has received five truckloads of relief food from the office of the Prime Minister to respond to drought induced food shortage in five sub counties.

These are Kapeta, Kacheri, Rengen, Nakapelimoru and Kotido Sub-Counties which are said to be hardest hit following intermittent rains and prolonged dry spell.

The district officials have confirmed that each household will receive 13 to 15 kilograms of maize flour (posho) and 10kg of beans.

Paul Komol Lotee, the Kotido district chairman, said the food aid will help community members who have been depending on wild cassava and fruits for survival.

“Drought has forced people to eat what they are not supposed to eat. Now the government should support my people to fight food insecurity,” he appealed.

Lotee added that they have planned as district to boost agricultural production but requested the government to provide the district with drought tolerant early maturing seeds, tractors and irrigation facilities in all the parishes to support households with food production.

Joseph Lomongin, the Kotido district chief Administrative Officer, said they decided to first focus on the most affected sub counties in order to save life since those areas have registered high cases of malnutrition and starvation

He however assured that other sub-counties would be covered once the Office of the Prime Minister sends more food.

Kotido district in Karamoja sub-region has 19 sub-counties including three divisions in the municipality.

Ambrose Onoria, the Kotido Resident district commissioner vowed to ensure that all the food is given to the people who need it.

“The life of my people is at risk. I appeal to the government to continue supporting the venerable people with food in the region,” he said.