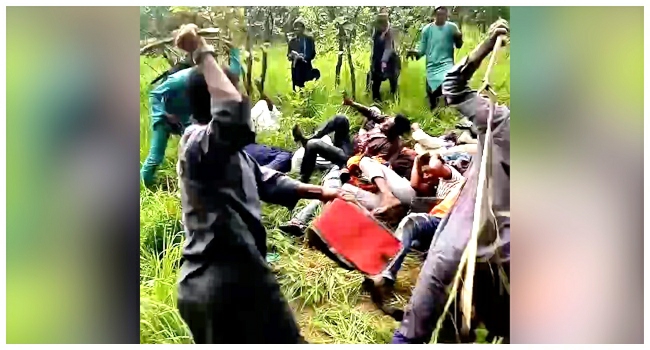 In the eleven-minute video, the terrorists were seen flogging the abducted Abuja-Kaduna-bound train victims in a forest over the inability of the federal government to meet their demands.

Terrorists had on March 28th bombed the Abuja-Kaduna train, killing eight passengers and abducted about 70 others during the attack.

A youth leader of the ruling All Progressives Congress (APC) Amin Mahmoud, a medical doctor, Tibile Mosugu, Dental specialist, Chinelo Megafu, and the secretary-general of the Trade Union Congress (TUC), Barrister Musa Lawal-Ozigi were among the victims killed by the terrorists.

The terrorists had claimed responsibility for the attack, as well as the bombing of Kuje Medium Prison Facility, Abuja, managed by Nigerian Correctional Service (NCOS), a situation that led to the escape of most wanted terrorists and other criminals.

Male captives were separated from the women as contained in the viral video, after which they were flogged ceaselessly.

Reeling in pains, the victims pleaded with the United Nations, African Union and Saudi Arabia to rescue them since the Nigerian government failed to secure their release.

One of the male hostages said that the terrorists had no intention of keeping them for more than a week if the demands of the kidnappers were not met by the federal government.

The terrorists were also seen threatening to kill the victims if the federal government decline on their demands, just as they claimed that one of the escapees of the Kuje Medium Prison Facility, Abuja had rejoined them in the forest.

Also, a woman was heard screaming to the terrorists, saying that, “This is all you can do. You will not end well for humiliating us like this. God will bring an end between us. What did we do to you?

Politicians, Leaders ‘II Suffer
On the abduction of Buhari and El-Rufai, the terrorists said that they will suffer the same way as the abducted train victims.

“We want your government officials to know that we will kill these people if you don’t meet our demand.”

“We know that the government is planning to rescue these people by force but we want you to know that every committee you set up, we are aware. You use guns and aircraft but we will conquer”, a member of the gang added.

The terrorists also boasted that they are doing the will of God and will not hesitate to enslave their captives as done to the kidnapped Chibok school girls in 2014.

“We’re doing the will of God and this is small compared to what you will see if you don’t grant our wish.”

“This is our message to the government of Nigeria and just as you have seen these people here, by God’s grace, you will see your leaders; your senators and governors will come before us”, they added.

Other Videos, Images
Recall that the abduction of Abuja-Kaduna train passengers occurred two days after a bandit raid at Kaduna Airport, resulting to the death of two personnel from the Nigerian Airspace Management Agency (NAMA) while several other workers were kidnapped.

In the last four months, the terrorists had released several videos and images, calling on the federal government to negotiate with them or asking the victims to negotiate for their lives.

In a video released in April, the terror group were seen putting on military camouflage and uniforms.

They compelled their captives to plead with the federal government to rescue them. One of the victims is a young lady, who identified herself as a student of Kaduna State University.

Another unidentified captive said that he was on his way to Kaduna for eye treatment.

“We’re the passengers from Abuja heading towards Kaduna and were abducted. We have sick ones, old and young; a mother and her children. Only God knows what we have been through here,” the victim said.

“Please, we are pleading that the government meet their needs and rescue us.”
A photograph also released in April showed 62 victims in four groups, including children, aged women and men.

Among them was an 83-year-old woman, who was said to be suffering from diabetes.

With Additional Report from Channels Television